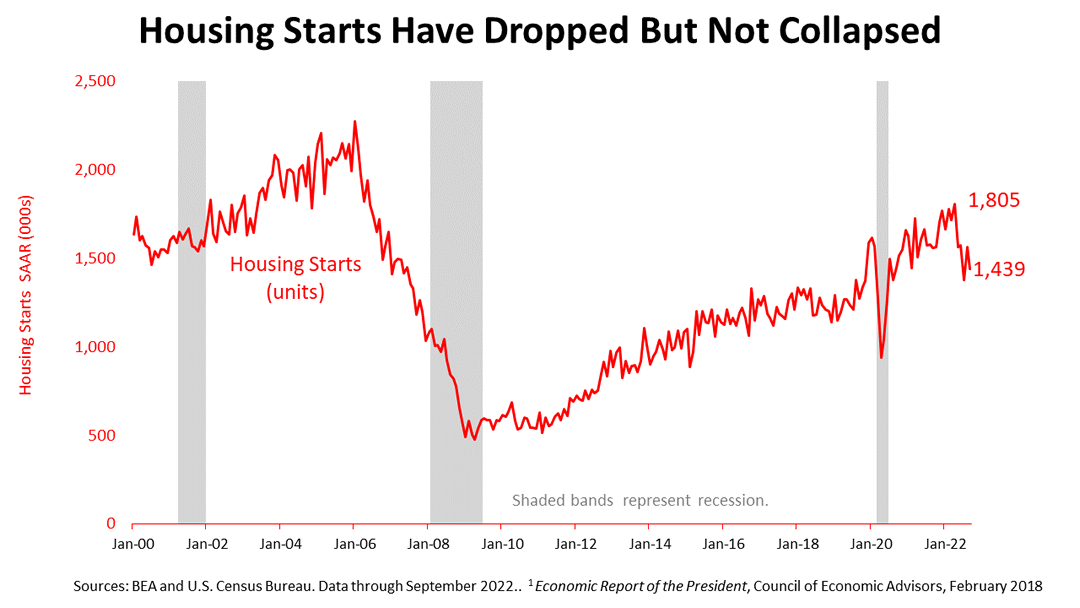 Housing starts have dropped from the peak rate of 1.8 million in April 2022 to 1.4 million in September, the nation is not experiencing the collapse in starts of new single-family homes. The current rate of housing starts remains much higher than experienced during most of the last economic expansion cycle, which ended with the Covid recession in April 2020. Multiple academic studies estimate the U.S. needs to build about 1.5 million new single-family houses annually to accommodate population growth. The actual rate of new houses started annually was less than 1.5 million for many years. 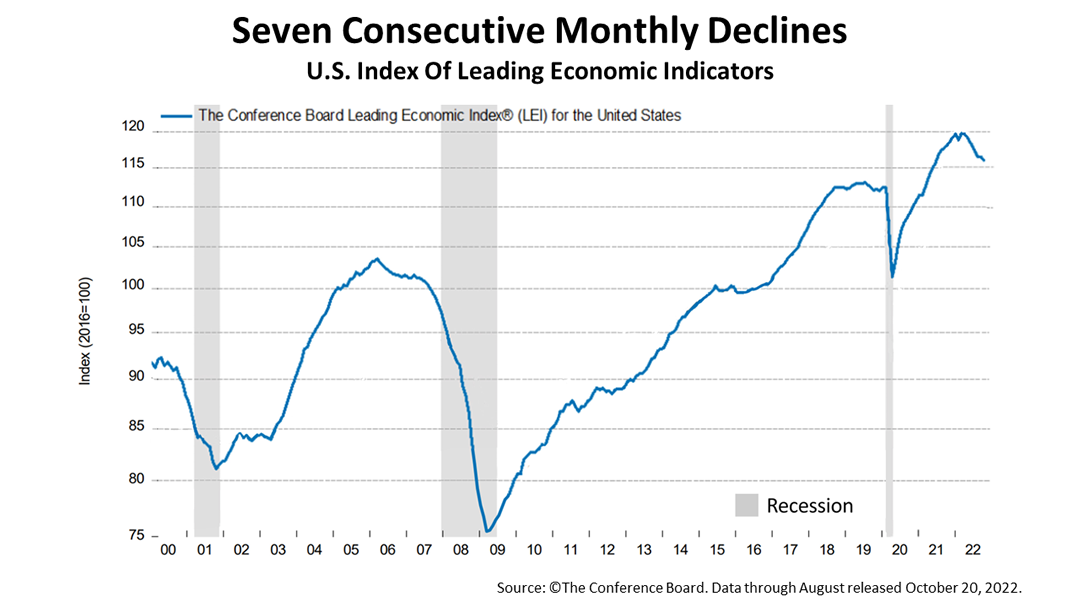 The U.S. Index of Leading Economic Indicators (LEI) declined for the seventh consecutive month, and economists at The Conference Board, who compile the data on the 10 indexes that comprise the LEI every month, now say the “persistent downward trajectory in recent months suggests a recession is increasingly likely before yearend.” This chart shows how the LEI has definitively rolled over well in advance of previous recessions, except for the Covid recession. 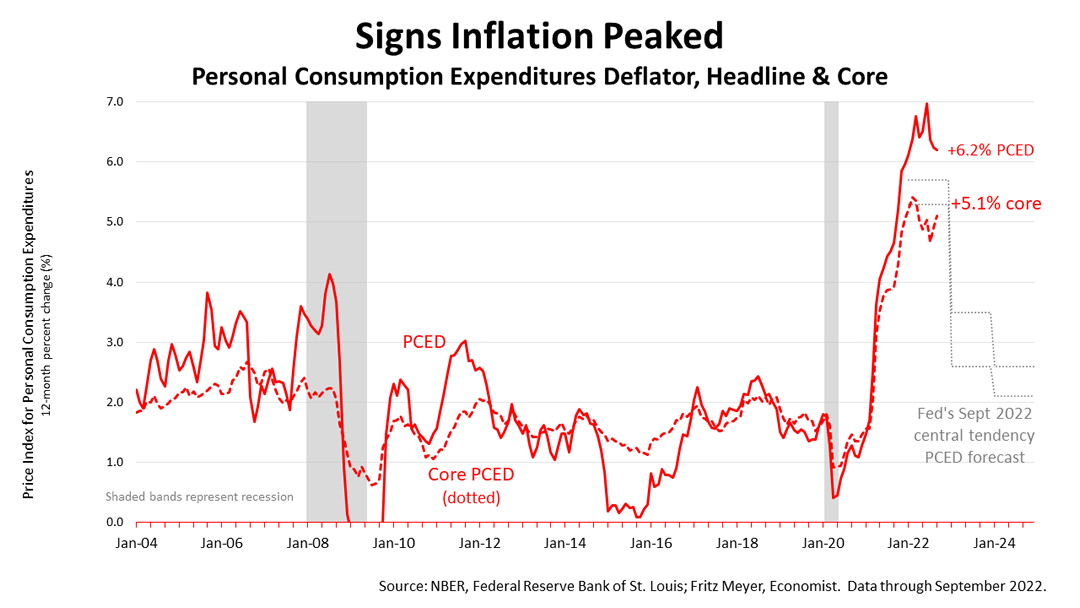 Inflation may have peaked, following its painful post-pandemic surge. The solid red line in the accompanying chart shows inflation using the metric used in official Federal Reserve’s policy pronouncements. The unfortunately-named Personal Consumption Expenditure Deflator (PCED) index declined again in September. From its peak in June 2022 at 7%, the PCED has declined sharply. However, the Core PCED index has not declined as definitively.

But economists at JPMorgan Chase and UBS are expecting inflation to plunge in the next year. Greg Ip, a veteran financial economics reporter at The Wall Street Journal,  said in an article on Wednesday, October 26, that JPMorgan Chase economists are predicting Consumer Price Index will collapse from 8.2% in September to 3.2% in September 2023, and that UBS’s economists predict inflation will drop to 2% by December 2023. 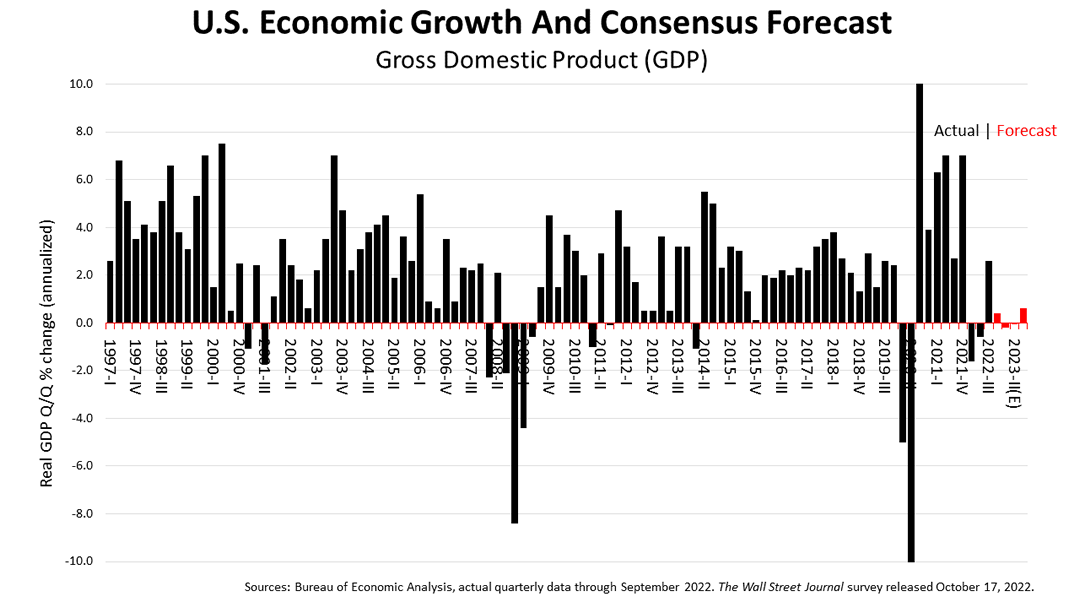 Released on Thursday, the Bureau of Economic Analysis’ advanced estimate of growth of U.S. gross domestic product (GDP) in the quarter that ended September 31, 2022, came in surprisingly high, at 2.6%. Just three weeks ago, the consensus forecast of the 60 leading economists surveyed quarterly by The Wall Street Journal called for a third-quarter GDP of 1.6% -- but it came in at 2.6%, exceeding expectations. But what’s more important to the investors is that the consensus forecast is for a short and shallow recession. The red bars on the right side of the chart above show the negative growth expected in the second and third quarter of 2023 by leading economists is slight compared to previous recessions since 1997. 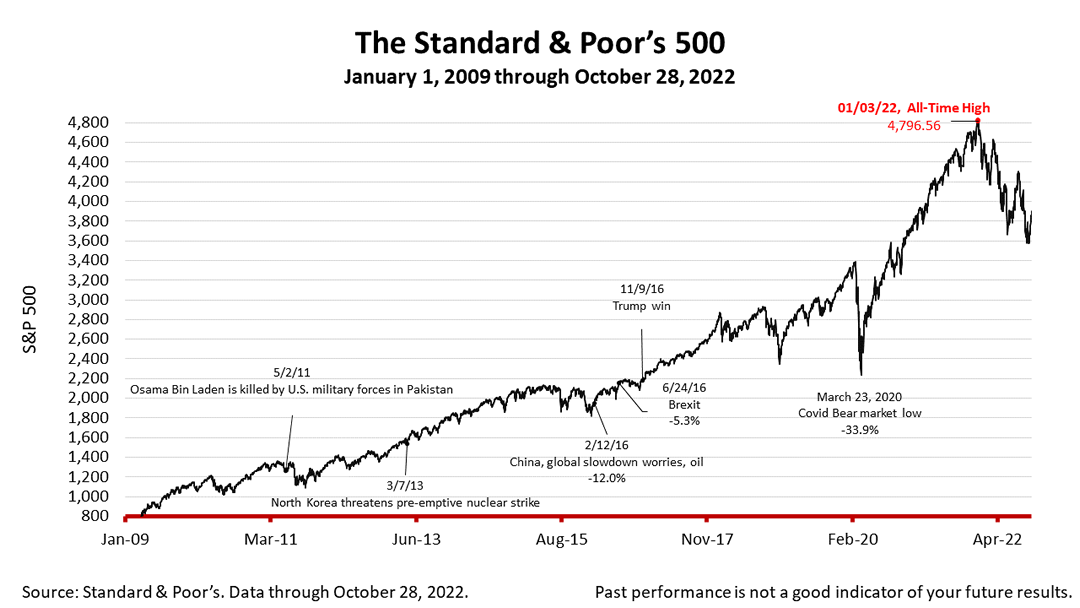 Let’s Talk About Stock Market Volatility
A Reminder To Investors Bracing For A Recession Am...