The Retirement Coach
The Consolidated Appropriations Act (CAA) of 2021, signed into law December 27, 2020, by President Donald J. Trump, was a massive $2.3 trillion spending bill. At 5,593 pages, Wikipedia says, it was also “the longest bill ever passed by Congress.”   Buried in CAA is a section on college-student aid dubbed “FAFSA Simplification.” It reduces the number of questions on the Free Application for Federal Student Aid (FAFSA) form from 108 to..
Continue reading 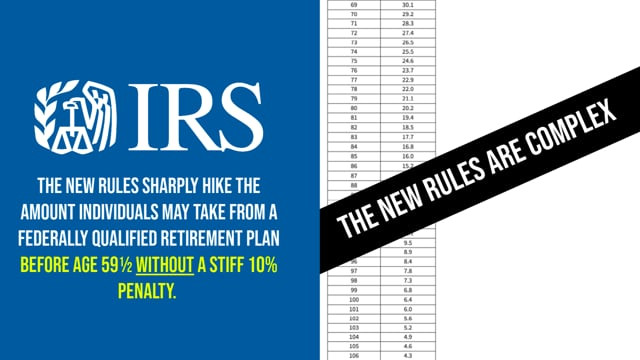 New rules released by the IRS in January are going to make it much easier for many Americans to retire in their early-50s...
Continue reading

The Retirement Coach
For the first time in 12 months, the U.S. Index of Leading Economic Indicators (LEI) ticked down, falling by three-tenths of 1% in January, as the Omicron variant, inflation, and supply chain problems cooled the hot economy. The LEI is a forward-looking index of 10 components, making it a reliable indicator of recessions and the pace of growth in the economy.  Apart from one other interruption in early 2021, the LEI has surged higher every m..
Continue reading

The Retirement Coach
Consumers do not expect the spike in inflation will last long. That’s the conclusion of six economists from the New York Federal Reserve Bank.  “Besides its tragic human toll, the pandemic has brought about extraordinary economic dislocation, including unprecedented supply and demand imbalances that have resulted in a sharp rise in inflation,” says a Thursday, Feb 14, post from the six economists who examine the results of a monthly su..
Continue reading

The Retirement Coach
With more than 100,000 Russian troops poised to invade Ukraine, the Standard & Poor’s 500 stock index lost -1.9% of its value Friday, after troop movements of Russian forces reportedly made a war in Europe more likely to break out at any moment.  The economic news, however, remained positive overall despite the Ukraine conflict and inflation woes.  The consumer price index, an inflation metric, released yesterday, increased anothe..
Continue reading

Tax And Financial Planning Are Not So Simple

The Retirement Coach
If you are like most people, you probably wouldn’t feel comfortable performing surgery to remove your spouse’s appendix. You probably would not fix the brakes on the family car. You probably would not risk tutoring your child to prepare for the SATs. So why do people think they can create their own financial plan to make their money last the rest of their lives? As an independent professional, it’s troubling to see consumers sold on believi..
Continue reading

The Retirement Coach
Crushing expectations, the Bureau of Labor Statistics (BLS) reported Friday morning that employers created 476,000 new jobs in January. The unemployment rate ticked up slightly, to 4%, still very low by historical measure.   The number to watch, however, is the labor participation rate, which edged upward by three-tenths of 1% last month, according to BLS. Since the pandemic hit, the labor force of the U.S. has shrunk more than e..
Continue reading

The Retirement Coach
New rules just released in IRS Notice 2022-6 sharply hike distribution amounts permitted from qualified plans before age 59½. The new rules will allow many more individuals to take substantially equal periodic payments (SEPPs) from their IRAs or 401(k)s in their 50s. With The Great Resignation under way, this is one of the most important personal financial planning strategies of 2022. A search on Google for “Notice 2022-6” earlier today yiel..
Continue reading

The Retirement Coach
Is the market correction done? The Standard & Poor’s 500 stock index had closed yesterday 10% lower than its all-time high of Jan. 3, officially meeting the definition of a “market correction.”  Today it rebounded sharply, by 2.4%. The correction could be over. No one can predict the stock market’s next move, up or down. Investor sentiment almost always is capable of swinging stock prices 10% at almost any moment. Eventually, fun..
Continue reading

The Retirement Coach
The slow shift in U.S. central bank policy lurched ahead today. Compared to its highly accommodative policy during the peak of the Covid pandemic, a significantly less accommodative stance was outlined by Federal Reserve Bank Chairman Jerome Powell today at a 55-minute press conference, broadcast live on YouTube, in which Mr. Powell answered reporters’ questions.   The Federal Reserve began shifting to a less accommodative stance in N..
Continue reading

Stocks Declined Sharply, Even As Economists Expect 3% Growth In 2022

The Retirement Coach
The Standard & Poor’s 500 stock index declined 5.7% for the week. It was the third consecutive week of losses and the worst week for stocks since March 2020. Yet the economic data released this past week indicated strong growth is ahead for the U.S. economy. Housing starts unexpectedly rose sharply in December, according to Census Bureau data released Wednesday.  With 1.7 million housing starts in December, growth in homebuilding has n..
Continue reading

Should You Care About Wall Street Stock Market Predictions?

The Retirement Coach
Wall Street’s forecast for 2022 is for a 4% gain in the Standard & Poor’s 500 stock index. But what does that really mean? Should you care? The answer is “not so much.” Wealth management is not predicated on predicting the stock market’s performance over the next year.  No one can reliably predict stock prices year after year and Wall Street’s no exception, according to this chart by independent economist Fritz Meyer. If the ..
Continue reading

The Retirement Coach
The index of purchasing activity at large manufacturers fell in December but remains not far from its record high, as did much the more important index of purchasing activity at large service companies.    Services account for 89% of U.S. economic growth, while manufacturing accounts for 11%, and about 90% of jobs in the U.S. are created by the service sector.  The purchasing managers indexes, which are based on monthly survey..
Continue reading

Make This Financial Resolution For 2022

The Retirement Coach
The U.S. stock market’s 133% five-year return dominated this diverse group of 13 securities investments. None of the other asset classes came even close to the total return of the Standard & Poor’s 500 stock index. With another year passing, the financial media is naturally talking a lot about the spectacular returns on stocks and real estate, and there’s a smattering of coverage about the big losers – investments in energy and commod..
Continue reading