What Happens With Your Assets When You Die?

The Retirement Coach
Since a 1965 book by financial planner Norman Dacey popularized avoiding probate, the strategy has become ingrained in the American financial psyche, and the U.S. financial system has accommodated consumers by making it easy to set up IRAs and other brokerage accounts to avoid probate. Now, with the first generation of Americans who set themselves up to avoid probate starting to die, the quiet evolution toward avoiding probate has suddenly create..
Continue reading 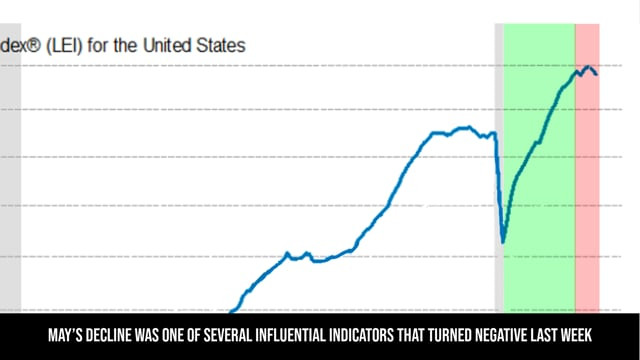 The Federal Reserve is still predicting a recession will be averted but the newly released economic data have darkened the forecast...
Continue reading

Odds Of A Soft Landing Shrunk After Friday's News

The Retirement Coach
In an ominous sign a recession is on the way, the U.S. Index of Leading Economic Indicators ticked down four-tenths of 1% in May, following a decline of four-tenths of 1% in April.   The LEI has a history of rolling over definitively before every recession since 1950, except for the Covid-19 recession. Comprised of 10 indexes, the LEI is a reliable forward-looking indicator of the foreseeable future. The LEI was doing just fine until Ap..
Continue reading

Now’s The Time Position Yourself For the Next Economic Expansion 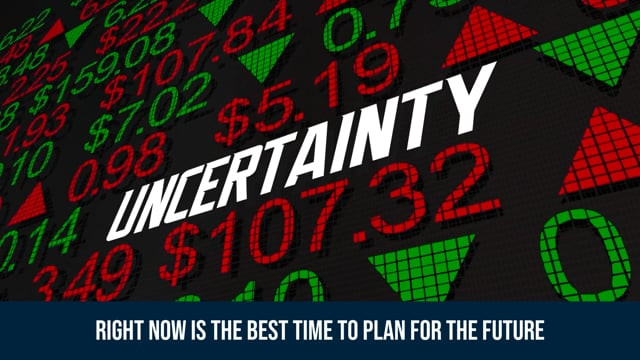 A bear market in stocks just began and the newly released inflation figures showed that the Federal Reserve’s plan to slow inflation in May had failed...
Continue reading

The Worst Of The Bear Market Is Over, Says Poll Of Professional Wealth Advisors

The Retirement Coach
Nearly half of professionals say the bear market would bottom after sustaining a loss of -25% -- a mere three percentage point loss from yesterday’s closing price. Another 34% of practitioners say the S&P 500 loss would bottom at a loss of 30% before a new bull market begins.  The poll was conducted Tuesday, June 14 at 5 p.m. EDT, at a financial economics class attended by more than 200 professionals. More than half of the advisors att..
Continue reading

The Retirement Coach
The inflation crisis of 2022 grew more fearsome with Friday’s release by the U.S. Bureau of Labor Statistics of a worse-than-expected consumer price index (CPI) report. For the 12 months through May 2022, CPI shot +8.6% higher, the highest rate since the inflation crisis of the late 1970s and early 1980s.  Higher gas prices are the main factor. Meanwhile, other threats to U.S. economic growth linger, including the war in Ukraine, supply ch..
Continue reading

It Could Be A Long, Hot Summer For Investors 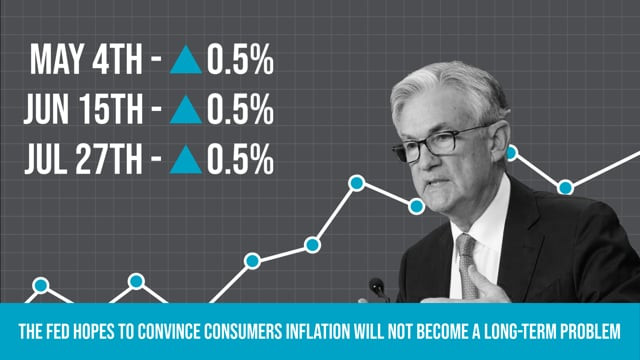 This could be a long hot, summer for investors...
Continue reading

The Retirement Coach
If you’re feeling stressed about inflation, the War in Ukraine, Covid-19 subvariants, you’re not alone. “Amid historic inflation spike and geopolitical strife, money and economic stress is mounting,” according to the latest results of a poll by the American Psychological Association (APA) and The Harris Poll. “These more recent findings were alarming,” according to APA. “Stress about money is the highest recorded since 2015.” &nbs..
Continue reading

It Could Be A Long, Hot Summer For Investors

The Retirement Coach
The Federal Reserve hiked rates on May 4 by a half-point. It was the first half-point hike since May 2000. This summer, the Fed plans two more half-point rate hikes, on June 15 and July 27. So this could be a long, hot summer for investors. Reminiscent of the 1958 movie, “The Long, Hot Summer,” starring “newcomer” Paul Newman and Joanne Woodward, who were married for 50 years after making the movie, this summer of financial and economic n..
Continue reading

The Retirement Coach
At age 65, only about 20% of American retirees have family and financial resources to cover high-intensity care for at least three years. About 30% cannot afford any help at all. The remaining half of older adults lie somewhere in between, depending on their marital status, education, and race. These are the grim conclusions of The Center for Retirement Research (CRR) at Boston College. CRR is part of a consortium of research groups funded by the..
Continue reading 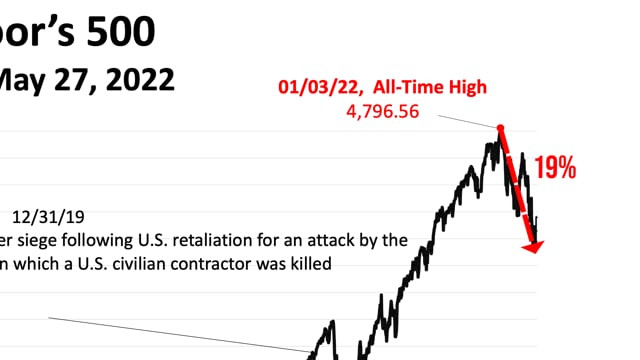 The list of risks threatening investors seems longer than usual and perhaps more frightening than ever. Stock prices on May 20 were 19% lower than the all-time high on January 3rd, edging precariously close to bear market territory. And inflation is out of control; the last time the inflation was this high was 1981!..
Continue reading

What A Difference A Week Makes

The Retirement Coach
Back from the brink of a bear market, the stock market snapped its seven-week losing streak. The Standard & Poor’s 500 index of blue-chip publicly-held U.S. companies gained +6.37% this past week. Just a week ago, the S&P 500 was down -19% and in the throes of the worst losing streak since 2001. However, according to consensus forecasts of economists, the U.S. is expected to grow by more than +2% in 2022. Newly released data on the Fede..
Continue reading

The Retirement Coach
The list of risks threatening investors is unusually long. Stocks are at the edge of a bear market. Inflation last raged so high in 1981. The pandemic lingers as does the risk of bad subvariants. Supply chain problems remain a drag on consumer spending. Oil prices could spike higher still, as Russia’s pariah  status compels Germany to impose a ban on imports of Russian oil and gas. This is a great moment to ask yourself: “What’s my pla..
Continue reading 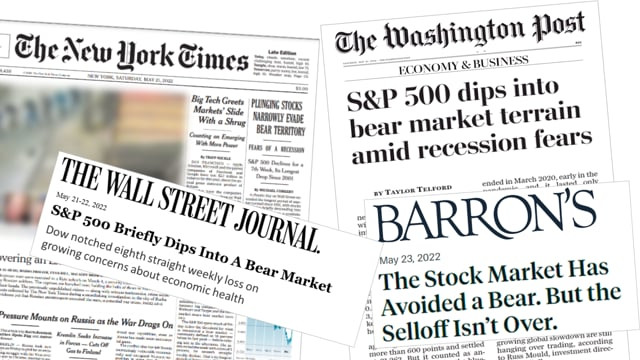 The headlines are ugly...
Continue reading

The Retirement Coach
The headlines are ugly. “Late Rally Lifts Stocks After S&P 500 Skims Bear Market,” according to WSJ.com’s top story after Wall Street closed today.  “Markets End Down for 7th Straight Week, Despite Late Rally,” according to NYT.com. Stocks are at the edge of a bear market – defined as a loss of -20% from the last record-high closing price of the Standard & Poor’s  500 index (on Jan. 3). Not since 2001, The Wall Str..
Continue reading 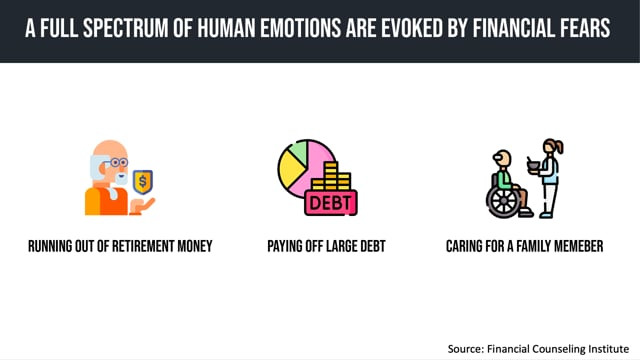 If the stock market and world events are making you feel financially insecure or fearful, talking about it with an expert can help...
Continue reading

Are You Checking Your Investments Daily And Worried About Your Financial Future?

The Retirement Coach
After flirting with a -20% decline from its record high price, which would have placed it in bear market territory, the stock market, as measured by the Standard & Poor’s 500 index, has bounced back – for now.  The drop in stock prices could resume, however. Inflation, Russia, and the pandemic are wild cards and any one of them could send stocks tumbling again. It’s a time of high financial anxiety.  2022 has been a bad year f..
Continue reading

Staying On Track Amid The Ukraine And Inflation Crises

The Retirement Coach
Despite a gain of +2.4% on Friday, the Standard & Poor’s 500 stock index declined for a sixth consecutive week – reportedly the longest losing streak since 2011. With stocks flirting with bear market territory – a loss of -20% from the last peak on January 3, 2022 – no one can say for certain when the financial and economic outlook will improve. Predicting the future is impossible. However, we do know how difficult times like these ha..
Continue reading

Getting A Good Estate Planning Result Is Hard

The Retirement Coach
At a class for professionals, L. Paul Hood, Jr., one of the nation’s leading estate planning educators of lawyers, accountants, and financial advisors, recently identified all the things that can go wrong with an estate plan. It’s a lot! For individuals facing estate plan questions, here are some important considerations. The players involved in creating an estate plan include you, the client, of course. But you will probably need to work wit..
Continue reading

For Investors, 2022 Is Turning Into A Test 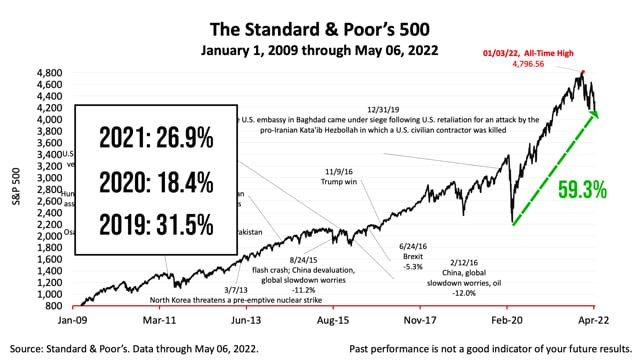